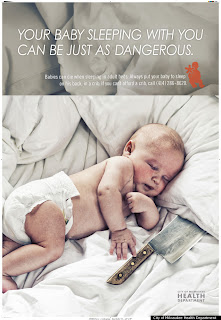 At almost 9 months, I’ve discovered something new about my little one. He doesn’t like to sleep alone. We’ve always held K in our bed until he fell asleep and then put him in his crib, which is in a small room attached to our room (K’s crib is a few feet away from us), but recently, that is not enough. He wants to stay in bed with us. In the last few weeks, he’s woken up several times in the middle of the night and doesn’t fall back into a deep sleep until I lay him in bed next to me. His favorite spot is right in-between Mommy and Daddy. He wants to be in the middle of it all! Needless to say, the bags under my eyes now have bags.

Recently, co-sleeping received national attention and drew much controversy when the Milwaukee Health Department released an ad of a baby sleeping with a knife in response to its increasing infant mortality rate. The tagline reads, “Your baby sleeping next to you can be just as dangerous!” The ad resulted from an increasing number of babies dying allegedly from co-sleeping.

Now, I’m not against co-sleeping. My mother co-slept with my nephew and he’s just fine. However, personally, I don’t feel comfortable sleeping with K in our bed. I also don’t want K to get used to sleeping with us. I do want time to be with my husband—if you know what I mean. But, our little one is determined to stay in bed with us. My reasons for not co-sleeping are not that deep. First, my husband is a big guy and I’m afraid we may roll over on him. There’ve been several nights where I was so tired that I forgot my husband put K in the crib and I rolled over and woke up in a panic shouting and searching my bed hysterically, “Where’s the baby?” Second, I’m afraid K will fall out of the bed, and lastly, I just can’t sleep peacefully with the baby in our bed.

Poor K. To compensate for the lack of body warmth and closeness he desires when sleeping, he sleeps in the corner of the crib with his back against the rail. It’s so precious, but I feel a hint of Mommy guilt. I think I will buy him one of those bears with a heartbeat for Christmas.
What are your thoughts? Do you co-sleep?

2 Replies to “Co-Sleeping: The Unpardonable Sin?”