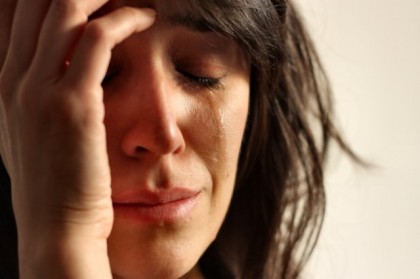 John 9:3 (NRSV), Jesus answered, “Neither this man nor his parents sinned; he was born blind so that God’s works might be revealed in him.”

It’s my belief that as soon as a baby is born, the mother is hit with a heavy dose of mom guilt. Mom guilt is the belief that everything negative that happens to your child and in your child’s life is because of something you’ve done wrong.

Mom guilt almost always comes with obsessive thoughts and questions like, “Could I have done this differently? Is it my fault? Why didn’t I do it this way? What’s wrong with my child?”

I think every mom experiences these types of feelings and asks herself these types of questions at one point during motherhood. My first bout with mom guilt happened a few days after my son was born. I broke down in tears because my milk hadn’t come in and I had to feed him formula. I was certain the formula would ruin his prospects for a healthy and successful future. I laugh at the incident now after having a second baby, but it was a real crisis for me then. I wish I could say mom guilt goes away at some point, but it never does. You just learn how to put things into perspective. You realize the baby will not die if you don’t make your own baby food or if you don’t breastfeed until he turns two.

However, what about more serious instances of mom guilt? What about cases of serious illness, autism, or developmental delays? I found myself at this place of extreme guilt this week when my son’s speech therapist encouraged me to have him evaluated for autism with a developmental pediatrician. My son turns three years old this week and has not met the developmental milestones for speech. Although I know my son’s speech delays have nothing to do with my parenting skills, I can’t help but feel like it’s my fault.

“It’s my fault he isn’t speaking on the same level as other children.”

Thankfully, the Lord didn’t allow me to carry this heavy burden for long. As I prayed for a favorable diagnosis, the Lord ministered to me from John chapter 9. The Lord reminded me of the blind man in the text and how the disciples asked if his condition resulted from his sin or from the sin of his parents. They automatically assumed someone must have done something wrong for him to face such a challenging circumstance. Jesus corrects them and tells them in verse 3 that neither have sinned, but the man was born blind so God’s works might be revealed in him. God allowed the man to face blindness so the glory of God could be revealed in his life as a witness to him and to others. The Lord shared with me that regardless of the diagnosis, he is allowing me to face this situation so the glory of God can be revealed in my son’s life. The doctors, teachers, and speech therapists may diagnosis my son with a condition, but God has the final say. Limitations may be placed on him based on a diagnosis, but when he exceeds those limitations and expectations, God will get all of the glory. I don’t have to feel guilty because of my son’s current situation and perceived limitations. This is not his final destination. God has the final say, and I don’t have to feel guilty because God is in control and he will demonstrate his mighty works through my son’s life. That’s the promise we have as believers. God is actively involved in our lives and in the lives of our children.

If you’re facing a difficult situation with your child and feel extremely guilty about it, cast your cares on Jesus because he cares about you. It’s not your fault. Actually, it doesn’t have anything to do with you. It’s so God can reveal his glory through your child’s life. Obstacles are nothing more than opportunities for God to demonstrate his power in your life. Hold on and be encouraged!