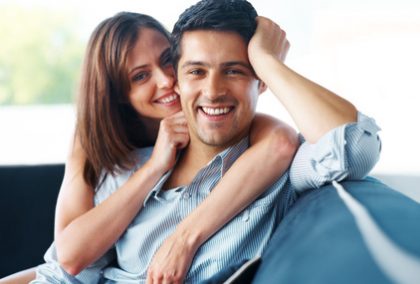 Your relationship is at the point where you’re ready to move together. Because it’s still the honeymoon period though, both you and your partner think it’s going to be easy. Yep, it’s a walk in the park because you’ve basically been cooped up together for the past six months anyway. What’s the difference?

Sorry to burst your bubble, but there is a huge distinction between sleeping in the same bed three nights a week and waking up to each other every morning. Once the keys are cut, there is no escape… apart from the door for which the key is made.

Anyway, the point is it isn’t easy. With that in mind, below are a few pointers.

Too many couples spend a whirlwind three months together and think they are ready. They might be, but the stats show men and women who don’t know each other tend to split. Of course, the trick is not to rush into anything and to take your time. Still, it’s not as if there’s a time limit so it can be tricky to tell. One of the best ways is to create a checklist and tick off as many as possible. For example, have survived arguments and do you have the same life goals? If so, then you’re probably ready.

Picking between your place and his isn’t a wise idea. Although it saves you money, it gives the other person the impression that the house isn’t their home. It’s as if it’s yours or his and everyone else is a stranger. Renting a new property or buying one is an excellent one to start your life together, and it will prevent unnecessary arguments. Anyone who can’t afford to do this should use Dumpsterator and throw out anything which isn’t important. Then, the house or apartment will be a bare shell which you can develop as a couple.

As well as choosing a new place to live, you should pick your battles too. Yes, there will be things which infuriate you in the beginning, stuff you never knew existed. However, arguing about every tiny detail is going to take the gloss off moving in together. As well as being a transition, it should be fun also. Therefore, it’s a good move to bring up the things which are important. Everything else can be tolerated until a later date with Psychcentral’s tips.

To be apart from one another. What makes having two apartments incredible is the fact you can retreat when things get too much. Don’t think of it as running away but taking a breath to figure out a solution. In a home which you both share, this can be difficult because there isn’t enough space. What healthy and happy couples do is find time to be with other people. That way, everyone has room, and that makes you appreciate your loved one.

Relationships are tough, so don’t make them harder by rushing into anything and constantly fighting.