There’s no time like the present to get creative with your children. As they grow, their minds are constantly evolving, and one of the best ways that they learn is through their creativity and their imagination. The sooner you’re trying to nurture that, the better off your child is going to be in the long run. Plus, it’s a great way to bond with them, and to have fun with them without having to go out somewhere and spend a fortune on tickets for an attraction. You could also be doing this to help them with something school related, as in the younger years, this is more of what the focus is on. Anyway, if you’re looking to have some creative fun with your children, here’s now we think you can do it. 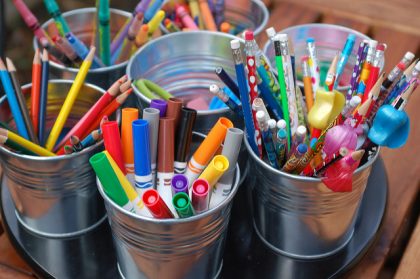 There’s so much you can do to try and nurture creativity whilst in the home. The first being arts and crafts. Younger children will be more fond of this, as it’s a way of them to express their own idea of art and creativity, whilst creating something that can be kept as a keepsake around the home. The little bits and bobs that they create as children are what we cherish forever! Heidi Swapp is just one brand of crafts products that could give you endless hours of fun in the home. Each week you should create something new, and each week you should be able to watch it get better and better. You could be making photo frames to decorate the home with, or making homemade birthday cards to hand out. It’ll be a messy affair, but it’ll definitely be worth it.

You don’t just have to be inside the house to be having creative fun. If you live near a woodland area, there’s a few things that you can do. The first is to literally build a fort out of sticks. It might sound extra childish, but, it’s such a good way of getting the imagination going. All you have to do is build them in a dome like structure, piling on twig and stick after twig and stick. It’ll probably take you a few hours to get right, but it’ll be so cool for your kids to play around it. If they’re sturdy enough, they might even last a few weeks! Top tip though, make sure you’re using a tree as the centerpiece so that the twigs can all stand up right.

As They Get Older

As they get older, you will generally find that their interests change. They might turn to sports, or gaming, or whatever else you can think of. But that still doesn’t mean that you can’t try to nurture their creative side by asking them to help with something you’re doing. It’s just something a little different to do so that they’re not glued to the TV all of the time. Plus, now that they would be older, the things that they’re going to be able to create whilst doing arts and crafts will be much more detailed and nice, so you could actually use them as something that will look really good.