If there’s a combination of words that every woman with a penchant and talent for DIY hates it’s “get a man in”. Aside from the obvious gender bias, we don’t like the idea of relying on others for help. DIY fixes and hacks may have once been a tradition passed from father to son, but DIY is just one of the many things that has been democratized by the digital domain. No longer are we reliant upon the patriarchy to share its secrets. All you need these days is a box full of tools and the right YouTube tutorials and any woman can become a DIY Jane in just a few hours. 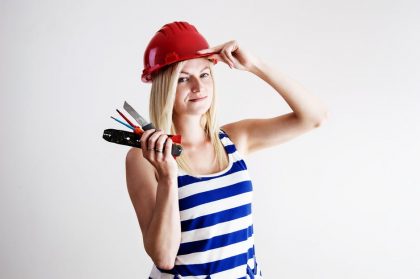 But as strong, smart and independent as we may be, we also need to know when to pick our fights. In our zeal to prove ourselves in a world where we’re still a long way from gender equality we must be wary of cutting off our own noses (hopefully not literally) to spite our faces. Here are some fixes that even confident DIY veterans should leave to the professionals…

We’re all fighting an ongoing battle to keep our homes under control. Not only do we need to ensure that they look great, we also have to keep them working. Your plumbing infrastructure is a big part of this. Very often, we take our plumbing for granted unless it’s not functioning as it should. But while changing a leaky faucet or unplugging a blocked drain are pretty straightforward fixes, anything that involves making changes to your existing plumbing infrastructure or repairing busted plumbing should be avoided and left to the Emergency Plumbers. Even a repair that looks great at first glance can go very wrong when the water is switched back on. Over time, unchecked leaks can do widespread and long lasting damage to your home.

Like plumbing, rudimentary electrical repairs can be fairly straightforward and extremely satisfying when we pull them off. Replacing light fixtures, re-wiring switches and other minor electrical repairs are fair game for seasoned DIY Janes. Major repairs, however should be avoided at all costs. Even if you’ve switched off your electricity at the junction box, electrical repairs can still be dangerous, especially when pertaining to the circuit breaker. The circuit breaker panel should never, ever be tampered with. This box distributes an enormous volume of electricity from outside and distributes it around the home. There’s no way for you to turn this off so tampering with the box could be lethal.

Now that summer is here, many of us are looking to our roofs to ensure that they’re well equipped to see us through the less clement months later in the year. While you should absolutely keep an eye on the roof, think twice about making any repairs yourself. One third of all construction related fatalities are caused by rooftop falls. With this in mind, even a rooftop repair that looks pretty cut and dried is probably best left to a pro.

Remember, there’s no shame in asking for help.