Skip to content
By Rev. Mrs. MommyApril 29, 2015MinistryLeave a Comment on Why I Hate the Term “Thug”

Unless you’ve been living under a rock, you have an idea of what’s transpired in Baltimore because of the suspicious death of Freddie Gray. He died in police custody due to a severed spine. As a result, riots and protests erupted in Baltimore in similar fashion to those in Ferguson, Washington, DC, New York and several other cities because of the deaths of unarmed black people.

Now, I’m not here to discuss my feelings about the police or the protests and riots. That’s not my focus. I want to discuss my disdain with the media’s use of the term “thug.”

After Baltimore riots, some leaders slam ‘thug’ as the new n-word

When 17-year old Trayvon Martin was killed by George Zimmerman, the media painted the picture of him as a thug although he did not instigate the confrontation with Zimmerman. They talked about his clothing, sagging pants, a hoodie, and a baseball cap. The media also showed pictures of him from his social media accounts to make the case that he was a thug. The same thing happened with Mike Brown, the 18-year old high-school graduate on his way to college who was murdered by the police in Ferguson, Missouri. They showed us a video clip of a man who they said was him pushing a store clerk aside to steal cigars. The media conveyed over and over that the boy was a thug despite his enrollment in college. They use the same portrayals of other unarmed black people killed by the police. They research their pasts for criminal records, and they present the victims as thugs.

These portrayals of young black male youth are not unique. Over and over again we see the media referring to young black males as “thugs” despite their social location. Baltimore Mayor Stephanie Rawlings-Blake and President Barack Obama used “thug” to describe the youth rioting in the city, which some say granted mass media permission to use the term freely. However, many of us who are conscious of the power of media know that “thug” is code to trigger certain feelings in the masses. The same way the words “urban” and “at-risk” are used by the media to describe people of color in poorer neighborhoods. 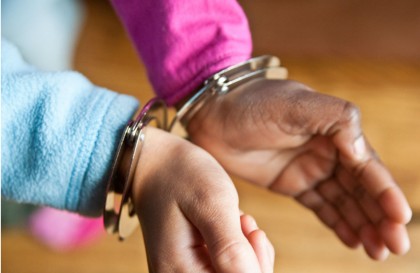 This is problematic for me as a black woman and mother of a son because since the release of “The Birth of a Nation” in 1915, black males have been portrayed in the media as thugs and criminals. So much so, that “thug” has become a media code word for black male. Everything from Hip Hop culture to urban black youth’s style of dress have been described by mass media as “thug culture” when this could not be farther from the truth. As a result of our conditioning by the mass media, black boys are often criminalized from an early age. Hence, the preschool to prison pipeline research and findings. It has been proven that black youth are suspended at a higher rate and dealt with more harshly than their counterparts because they are viewed as thugs or menaces to society. A mother recently wrote a blog post about someone referring to her toddler as a thug. I, too, have experienced and witnessed the negative treatment of my son. When he was 1-year old, we went to a My Gym in Northern Virginia, a predominately white area, and the other parents yanked their children away from my son. They did not want their children to play with him. My guess is they viewed him in a negative light because of their conditioning and brainwashing by the mass media. They treated him as a problem despite him being only 1-year old.

In the documentary “Manufacturing Consent,” Political Activist Noam Chomsky details how the mass media shapes and conditions the opinions, ideology and thoughts of the masses therefore shifting their consent to the desired outcome of the powers that be. We know the power of the media. You should also be aware that the United States has fed its citizens propaganda through the media for years. The use of “thug” when describing young black male youth is another attempt to manufacture the consent of the masses that our children and teens deserve to be dehumanized and murdered by the police. Sadly, the media is doing its job very well. This is why I hate the term.

My challenge for all of us today is to take a step back and critically think about all that is going on. Put yourself in the other person’s shoes. Don’t be so quick to use this code language to dehumanize your neighbors. The real thugs are the ones seeking to take away all of our rights to life and liberty as human beings.

For fun, google “thug” and see what images come up to shape people’s perceptions.