Skip to content
By Rev. Mrs. MommyMay 24, 2018Ministry, Spiritual LifeLeave a Comment on MADD Volunteer Work, Noah on Patrol and How God Uses Us to Intercede in the Earth

I volunteer for Mothers Against Drunk Driving (MADD). I do so because a drunk driver hit my husband when he was a teenager and the traumatic brain injury he sustained as a result caused his premature death. This week MADD asked me to attend a press conference about the launch of a new initiative in Montgomery County, M.D. to deter DUI offenders from repeating their offense. The initiative is called “Noah on Patrol.” The parents of fallen police officer Noah Leotta, who died on duty in 2015 after a drunk driver struck him, lobbied tirelessly for years to get it passed. 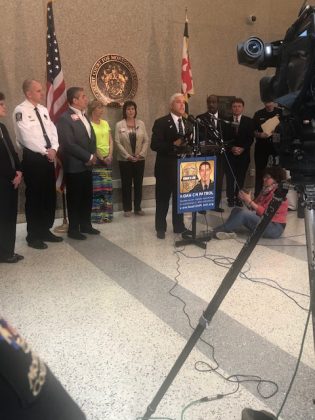 I met the CEO of MADD, Chuck Hurley and a few other MADD employees, and I heard from the county executive, district attorney and Noah’s parents about how this initiative would save lives. At first, I felt out of place because there wasn’t much for me to do except stand as a witness and supporter of the initiative. Generally, when I do engagements for MADD, I share my story or speak to other victims of drunk driving. I’ve done press for MADD before, but this time, I sat and listened.

As the press conference progressed, I thought and prayed, “Lord, why do I need to be here? I’m just observing.” It’s then I believe the Lord impressed upon me the need for praying, Kingdom people to be in place to intercede on the behalf of others. I honed in on Noah’s mother, Mrs. Marcia Goldman. She stood there with tears in her eyes, holding her hands and leaning against the courthouse wall while gracefully maintaining a pleasant face while everyone talked about Noah, her son. Her baby. That’s when I knew the Lord placed me there to pray for her, to stand in the gap for her and intercede on her behalf. Although we never met before Tuesday, we both suffered tremendous loss. We both are mothers, and we both are/were grieving.

“When he saw the crowds, he had compassion for them, because they were harassed and helpless, like sheep without a shepherd”—Matthew 9:36 (NRSV).

In ministry we enjoy boasting about preaching engagements and our booked schedules. However, what if many of our assignments from God are not on the stage? What if many of our engagements are to stand in the gap in places away from the flashing lights to intercede on the behalf of God’s people? What if God needs disciples to stand as witnesses, sometimes without even saying a word, to let the world know that God is still in control and cares for His people? Just something to think about.

Please keep the Leotta family in your prayers, and you can visit Noah on Patrol and MADD for more information about how you can keep the roads safe from drunk drivers.