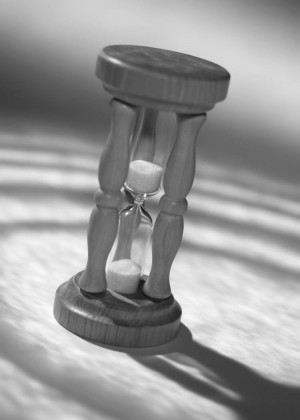 Ezekiel 24:18 (NRSV), “So I spoke to the people in the morning, and at evening my wife died. And on the next morning I did as I was commanded.”

“We will do something next year. I promise.” Those were some of the last words my husband spoke to me last year. It was Wednesday, June 19, 2013, our 3rd wedding anniversary, and we found ourselves at home on the couch, watching TV and eating pizza. I had to work that evening so my sister came over to watch my son. By the time I returned home, we were all eating pizza and settling in on the couch. Never in a million years did I imagine that two days later, my husband would be gone. We never had the opportunity to have our anniversary do over.

I’ve been reflecting on time in this season, and of course with what I have gone through, I am learning that time is the most precious and valuable asset we have. Time to watch our children grow. Time to love our spouses and family members. Time to spend in devotion and communion with God. Time to take in life’s moments because we will never get that time back. That is why the Bible admonishes us to walk circumspectly, redeeming the time because the days are evil (Ephesians 5:15-16).

This issue of time came back into the forefront of my mind this past week as I found myself repeating to my supervisor, “I answered my phone for you during my honeymoon!” I expressed that to him because I wanted to communicate how seriously I had taken my job. To that he responded, “That was your choice.” After I came home disappointed by his response, the sentiment I expressed kept resonating in my mind when the Lord dropped the following in my spirit.

In the last month, my devotional reading has been the book of Ezekiel. A couple of weeks ago, I was arrested by chapter 24 when God tells Ezekiel that with one stroke, his wife, the delight of his eye, is going to die. God tells him that her death will be a sign to Israel that God is going to take away the delight of their eye, the temple. In verse 18, the Bible says that early the next morning, Ezekiel gives the word he received from God to the people, and the text says, “and at evening, my wife died.” I wrestled with the meaning of this text for weeks until the Lord illuminated it for me.

There are unaccounted for hours in verse 18. Ezekiel rose in the morning to give the prophetic word and that evening his wife died. The Lord told me that between Him giving Ezekiel the word that his wife was going to die and that evening, Ezekiel was spending precious and valuable time with her saying his goodbyes and tying up all loose ends. He was telling her how much he loved her and appreciated her and thanked God for allowing her into his life. He spent his last day with his wife totally focused on her. Wow. Imagine for a second with me. What would you do if God said that you only had 24 hours left with the delight of your eye? Unfortunately, most of the time, we don’t receive that warning, so it’s imperative that we put first things first and make spending time with those whom we love and value our top priority.

Of course, I have regrets that I wasted precious moments with my husband by answering business calls during our special days. I will never get those moments back with him. However, moving forward I know that I will never place anything above those whom I love. Jobs come and go. People come and go. But, time with the ones who love you the most is priceless.