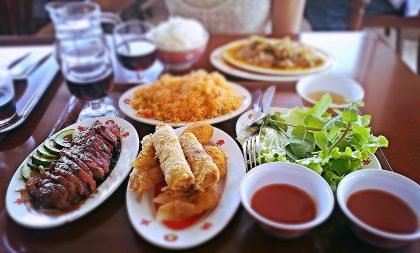 When guys age, the realizations that we can’t continue to eat junk food forever hits home. The body slows down to the point where exercise isn’t enough. Sorry, but it’s time for a diet. Now, there is nothing wrong with the concept, but the execution is flawed, mainly because the food is tasteless. If meals where healthy and packed full of flavor, then you’d be able to stick to the plan. Hell, you may choose to ditch the pizzas and the beer for good!

The good news is this may not be a pipedream. Here are the tricks to turn healthy ingredients into delicious meals.

Salt gets a bad rep because it is unhealthy in large doses. However, it’s not fatal unless you abuse it and use it recklessly. There is no need whatsoever to avoid putting it in your dishes during cooking. In fact, salt and pepper should be the two main ingredients to stop food from tasting like sand. The key is to try the sodium beforehand to get a gauge of the saltiness. That way, you won’t overuse it. Secondly, it’s important to build the seasoning in stages. Don’t whack it all in at once. Instead, add a spoon and wait twenty minutes and add another one.

There aren’t many things healthier for you than plants. If only they were tasty! Well, they can be depending on the ones you pick. Forget the veggies as they are bland, and focus on organic herbs. What’s incredible about a herb is its strength. One pinch of cinnamon or turmeric will transform the dish. And, because you don’t need many of them, there are no added calories. You can grow your own and chop them up or buy them in bags ready to add to the pan. Both are healthy, so the choice is yours.

Play One Off Of The Other

We aren’t chefs, so we don’t understand which things go together. As a result, most people don’t try anything different in the kitchen. You need to get creative if you’re going to change the taste. Start by playing different flavors off one another to add sharpness. For example, fruits such as mango and apples go well with chilies. The heat and the sweetness combine to take food to another level. And, they’re both healthy. Remember that sweet, salty, spicy and sour are the four main points on the food compass. Combine as many as possible for new flavors and dishes.

Your kitchen isn’t Masterchef and there are no awards for presentation in your world. However, studies do suggest that how a dish looks impacts the taste. In theory, it shouldn’t have any link whatsoever, but that’s not how the human brain works. As soon as it sees something it likes the look of, it automatically assumes it’s delicious. This primes the mind to give it a chance rather than judge it as disgusting. Gourmet isn’t on the table, but there’s nothing wrong with rustic.

Do these tricks sound they will work for you?